If you have mitral valve disease, Florence Wormald Heart & Vascular Institute at St. Elizabeth Structural Heart and Valve Center offers a range of options for mitral valve repair and replacement led by Greater Cincinnati’s most experienced surgeon in minimally invasive mitral valve surgery. We perform endoscopic minimally invasive mitral valve surgery even for complex cases, using a small incision between the ribs on the right chest. Our heart experts also have options to implant a MitraClip™ device to reduce valve leakage in high-risk surgical candidates, or conventional open heart surgery when necessary.

Our experts believe that early action to repair the mitral valve can prevent irreversible damage to the valve and the heart and offer a better quality of life in the short and long term.

Options for treatment include: 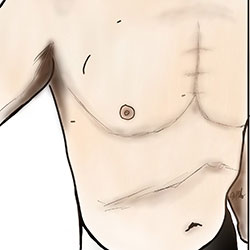 During valve surgery, the physician makes a one to one-and-a-half-inch incision (figure 1) in the right chest between the ribs. The surgeon uses long, thin instruments to work inside the heart and repair the valve. The patient is connected to a heart-lung machine to redirect blood flow and stop the workload of the heart during the procedure.

The mitral valve is like the canopy of a parachute (figure 2) with chords that anchor to muscles and hold the valve in place. If one of the chords becomes stretched or damaged, it can cause imbalance and leakage back into the upper heart chamber. 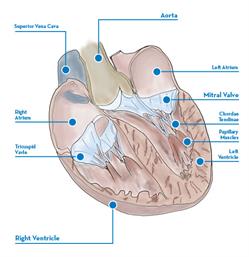 Repairing the mitral valve involves fixing the two leaflets (flaps) by replacing damaged chords with Gore-Tex® sutures and placing a ring of metal or plastic around the top of the valve (called an annuloplasty) to reinforce the repair and prevent future leaks. In some repairs, a small, damaged portion of the valve may be removed.

Our surgeons prefer to repair rather than replace a valve for degenerative disease, since your own valve will last much longer than an artificial valve. There are cases, however, where your own valve is damaged beyond repair. In these situations, using a mechanical valve or one made from cow, pig or human heart tissue is the best option.

In addition, studies now show this minimally invasive approach offers better outcomes in mitral valve repair than the robotic approach¹, with shorter recovery than conventional open heart surgery. For that reason, the procedure is quickly becoming the new gold standard in centers of excellence.

For those who are not a candidate for valve surgery due to health risks, a MitraClip device, about the size of a small paper clip, is used to clamp together the two leaflets of the mitral valve. This closes the valve more completely to reduce leakage.

Our interventional cardiologists insert a narrow tube called a catheter in a vein at the top of the leg and advance the MitraClip to the mitral valve in the heart. It is precisely positioned above the leak in the valve, and the arms of the clip hold the valve leaflets together to reduce blood seeping back into the atrium.

Patients generally go home from the hospital the next day, and recovery time at home is minimal. Most patients see significant improvement in their symptoms and their quality of life soon after the procedure.

During conventional open heart surgery to repair your own valve or replace it with a biological or mechanical valve, your surgeon will make an incision down the middle of your chest and cut open your breastbone to access your heart. This opening of the breastbone is called a sternotomy.

In the past, conventional open heart surgery was the only way to perform mitral valve surgery. Today, it is still an important option for certain complex or emergency cases.

After conventional open heart surgery, you will typically recover in the hospital for five to seven days. You can resume most activity in about four to six weeks. For the first six weeks, however, you will not be able to lift heavy objects or perform activities that strain your upper arm muscles or chest muscles.

Your mitral valve is one of four heart valves that regulate the flow of blood through your heart. This one-way valve has two flaps that open and close to permit blood flow from the left atrium (upper heart chamber) into the left ventricle (lower, main pumping chamber). It is the most commonly repaired heart valve.

In general, there are three main types of mitral valve disease: 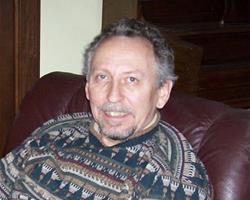 When Ken Foltz found out he needed mitral valve repair, he figured he would need a traditional open-heart procedure and a long recovery. But thanks to the minimally invasive expertise at St. Elizabeth Healthcare, he was able to get back to doing what he loves within a few weeks of his diagnosis.

St. Elizabeth Edgewood has attained advanced certification by The Joint Commission and the American Heart Association as a Comprehensive Cardiac Center, placing us in an elite group of hospitals that have met high standards to fully address the needs of patients with complex cardiac conditions.